Towards an Effective and Equitable Climate Change Agreement

A Wuppertal Proposal for Copenhagen 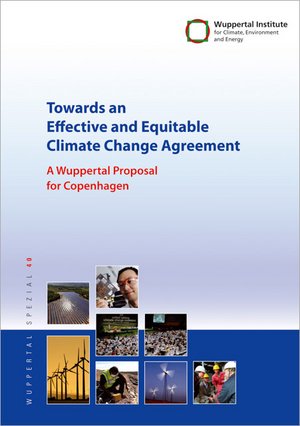 For the climate conference in Copenhagen, December 7 to 18, after broad expert discussions, the Wuppertal Institute for Climate, Environment and Energy submits a proposal for an effective and equitable climate change agreement. Its core points are:

1. Emission targets. Climate change is occurring much faster than previously expected. The limit of a 2 °C temperature increase can be safeguarded only through urgent and comprehensive measures. Which means: Until the year 2050 global emissions have to be reduced by 80 % compared to 1990. In view of the expected world population of up to 9 billion people, this implies that at that date each person on this planet can emit not more than 1 t CO2-eq. per year. Since greenhouse gas emissions from farming, for example rice growing or cattle farming, can be decreased only in part, until 2050 emissions from fossil fuels and industrial gases may have to be reduced almost to zero.

This heavy reduction also applies to the population of the industrial countries, for two closely connected reasons. First: There is no ethical justification for one part of mankind to be permitted to spoil the environment more than other parts. Second: The developing countries will sign no agreement granting the industrial countries more emissions permanently. (Regarding Germany, quite recently the Prognos AG, the Öko-Institut und Dr. Ziesing on behalf of World Wide Fund for Nature have shown in a comprehensive study that lowering emissions to 0,9 t per person until 2050 is possible, as well as financially affordable.)

To reach the final target of equal emissions, the industrial countries should agree to reduce their emissions by 40 % until 2020 as a start.

2. Reliability. Declarations alone will not save the climate. The industrial nations and the emerging economies will have to agree to action plans elaborating in which ways and when they will reach the goals they have promised.

3. Positive signals. A climate treaty should not only declare limits and demand reductions. It also has to show how a sustainable energy supply can be secured. Therefore the improvement of energy efficiency and the expansion of renewable energies should be part of the treaty. A possible forerunner is the 20-20-20-target of the European Union: until 2020, emissions are to be curbed by 20 %, energy efficiency is to be increased by 20 %, and renewables are to reach a 20 % share. While these targets are too weak compared to the environmental imperatives, the general approach recommends itself for adoption.

4. A global investment program. Meeting such targets constitutes a huge challenge for industrial nations already. For the emerging economies and even more for the poorer developing countries this is a task they cannot shoulder alone. With their limited means they will neither reach sustainable development by themselves nor will they be able to adapt to the impacts of climate change.

The industrial nations will therefore have to bear the bulk of the efforts to save the climate. For one, they have to fulfil their own ambitious reduction targets. In addition, they should accept an obligation to assist the developing countries in emissions-saving development and also in coping with the climate damages. The Marshall Plan can serve as an example of a successful strategic model of cooperation. After World War II the USA invested 1 % of its gross national product in the rebuilding of Europe over a period of five years in order to avert the danger that destroyed Western Europe might come under the influence of the Soviet Union. Climate change must be seen as an even greater strategic challenge.

Surely, the recipients of climate change support will themselves have to produce appropriate contributions to climate protection. Their efforts will have to be internationally assessed, and only in this way they will qualify for support.

5. Financing. The most promising way to raise the necessary means for climate protection is the auctioning of pollution allowances. There are several models for the implementation of this approach. The Wuppertal Institute favors a global climate trust. It selects the recipients, determines the appropriate sums und sees to it that the rules are kept.

Since building such a global trust will take time, the existing institutions should, in order to permit a speedy start, for the time being, assume the task.

Towards an Effective and Equitable Climate Change Agreement

A Wuppertal Proposal for Copenhagen