Kashiwa-no-ha Smart City in Japan as a Model for Future Urban Development? 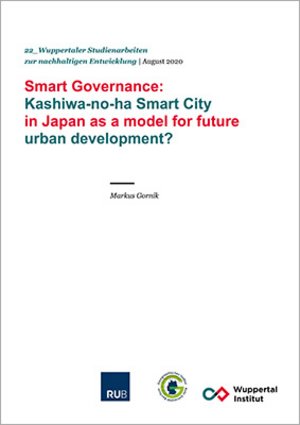 Since urban processes need models of possible futures (referred to as travelling concepts) to drive their development, this study investigates whether planned-from-scratch smart city Kashiwa-no-ha International Campus Town Initiative can produce such an image with its smart governance approach, that is combined with an urban living lab. Using geographical governance research in relation to urban development processes as a framework, this master's thesis derives its own definition of the fuzzy concept of smart governance within the smart city vision based on a socio-geographical understanding of space, here referred to as Smart Urban Governance. Additionally, a set of indicators for the operationalisation of Smart Urban Governance is designed and applied to the case study. Methodologically, the thesis pursues a qualitative approach and, in this context, carries out a descriptive and normative governance analysis of Kashiwa-no-ha on the basis of the existing literature and empirical surveys conducted by the author.

In summary, the strong role of academia in the urban planning context of community-building in Kashiwa-no-ha is exemplary and has led to a collaborative code of conduct between the traditional actors, mediated by a public-private-academic partnership, as well as to co-innovation between the city, developers, and citizens in form of a public-private-people partnership. Although the flagship project successfully addresses a large number of the Smart Urban Governance indicators defined in this context, there is potential for improvement, for example, in terms of participation, transparency, inclusion, and public spaces. Since Kashiwa-no-ha Smart City is still in an implementation phase until 2030, the thesis concludes with a forecast and a recommendation for action based on a strengths, weaknesses, opportunities, and threats analysis.