Synergies and Conflicts from an Energy and Climate Policy Perspective 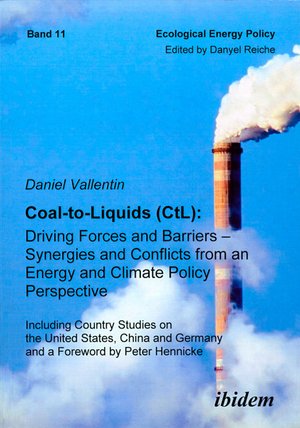 Several countries with large coal deposits but limited domestic oil reserves show high interest in coal-to-liquid (CtL) technologies, which could reduce crude oil imports by converting coal into liquid hydrocarbon fuels. After decades of successful large-scale operating experiences in South Africa, CtL activities in the United States, China and Germany have been fanned by the high oil price in the last years.

Daniel Vallentin analyses interdependencies between technical and non-technical parameters affecting the diffusion of CtL technologies in the United States, China and Germany. Applying the inter-disciplinary technological system approach, he identifies factors which determine the market prospects of CtL in these countries, including costs, the geographic distribution of coal reserves, actor constellations and technology, energy and climate policies. At the end of his study, he derives general conclusions with regard to driving forces and barriers for CtL diffusion.

As the investigated countries are major consumers of energy and belong to the world's largest emitters of greenhouse gases, their strategies in substituting crude oil based fuels are of utmost global relevance. Therefore, Vallentin's study is recommended to experts, planners, decision-makers, and politicians in the field of climate and resource protection.

Synergies and Conflicts from an Energy and Climate Policy Perspective