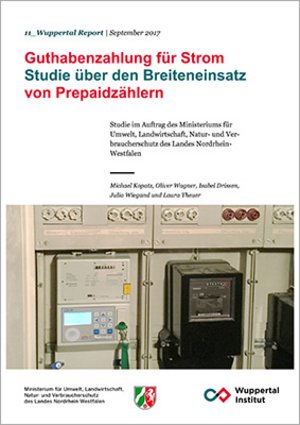 Many poor households in Germany and those that are close to the poverty threshold are likely to suffer from the increases in electricity cost. As a consequence, an increasing number of power cuts can be observed. According to the Federal Network Agency, a total of nearly 350,000 interruptions of electricity supply was reported in 2014. In order to avoid a cut from the electricity grid more and more utility companies offer prepayment meters (PPM) to their customers as a reply to outstanding payments and a growing number of customers being in energy debt. The phenomenon of energy poverty in Germany is new and, thus, the number of prepayment meters is still low. As a consequence, experiences in this context are - compared to other countries (e.g. Great Britain) - far from being extensive. On behalf of the Ministry for the Environment, Agriculture, Nature and Consumer Protection of North Rhine-Westphalia, the Wuppertal Institute conducted the first scientific survey of households with PPM in Germany and presented the results in this Wuppertal Report.