Essays on Wealth in Diversity, Enjoyable Limits and Creating Commons 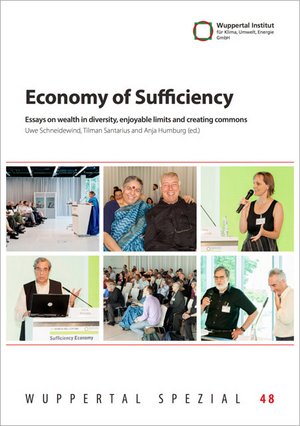 Another summit of change, known as Rio+20, has passed in summer 2012, nourishing the rumours of a green economy. Building up a green economy seems to be the all over recipe for different crises of capitalism, among them climate change and resource scarcity. Yet efficiency and consistency, as their main strategies, do not suffice to reach sustainable levels, as they cause rebound effects and keep stimulating economy growth. Obviously, there are limits to green growth, too. Can we conceive an economy, and respective economic institutions, that serve human needs and wealth without a built-in necessity to grow? What kind of political, mental, and individual changes does a sufficiency economy require? And what are perspectives and policies to actually start implementing it?

Just before Rio+20 the symposium "Economy of Sufficiency", devoted to Wolfgang Sachs on the occasion of his 65th birthday in 2011, examined these questions in three dimensions. Accordingly this selection of contributions to the symposium follows the chapters "Wealth in diversity" (Ashok Khosla, Marianne Gronemeyer, Vandana Shiva), "Enjoyable limits" (Richard B. Norgaard, Tim Jackson) and "Creating commons" (Ezio Manzini, Silke Helfrich).

The essays indicate the historical development of the ideas on a sufficiency economy. Wandering through discourses of sustainable development for several decades, the authors map the range of perspectives, practices as well as barriers and bridge them between cultures, agencies and schools.

Essays on Wealth in Diversity, Enjoyable Limits and Creating Commons