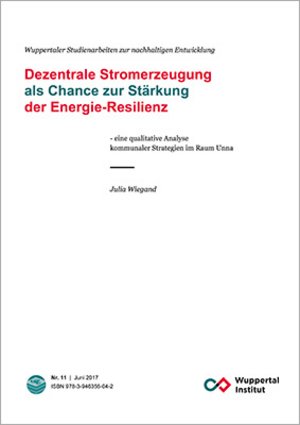 Modern societies are dependent on electricity in all areas of life. Longer power cuts or even a blackout could lead to a threat of public security. In order to prevent this the concept of resilience is gaining importance in the design of energy systems. Resilient energy systems should be able to withstand all kinds of disturbances and continue to provide their system services. In the course of the energy transformation, the energy system becomes decentralised and due to various characteristics it is considered to promote energy resilience. Small production plants close to the consumers with a high spatial dispersion and a high diversification of the energy carriers ensure little damage in the event of a plant failure. The municipalities, as places of decentralised electricity generation, gain in importance and can influence the resilience of the power supply through decisions. The aim of the work is to analyse the role of energy resilience in the municipal strategies of two municipalities in the Ruhr area, Unna and Bergkamen, with regard to decentralised electricity generation structures. For this, qualitative interviews with the mayors of the municipalities were conducted and evaluated with the content analysis according to Mayring (2002). In order to elucidate the space-specific characteristics of an old industrial area by the energy transformation, the multi-level perspective according to Geels (2002) was applied from transition research and extended to the spatial context of the municipalities. The results show that the existence of municipal utilities with their own power generation can be regarded as an energy-resilience-enhancing factor in both municipalities. However, the motivation on the part of the municipalities is not necessarily to achieve a resilient energy system, but to generate revenue for the local authorities. The most important inhibiting factors were the change in the direction of energy policy on higher political levels, the scarcity of space and the path-dependency through the mining tradition. Thus energy-resilience-enhancing modes of action are prevented and existing opportunities and potentials remain unused.