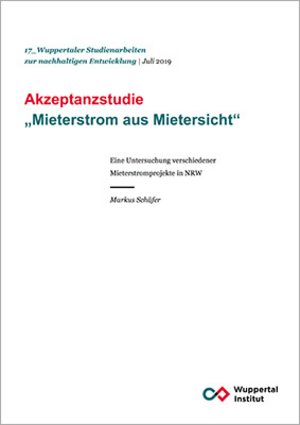 The aim of the acceptance study "'Mieterstrom' from the tentants' perspective" was to evaluate and interpret the view of electricity consumers on the decentralized supply concept "Mieterstrom". The author researched, in how far the tenants in buildings, in which "Mieterstrom" had been implemented, were informed about the concept, if they accepted it and which factors influenced their acceptance. To reach that aim, 61 questionnaire-based face-to-face interviews were conducted in seven "Mieterstrom"-projects. The tenants were asked for their motives in the choice of their power supply and their level of information. In addition, the author conducted guideline-based expert interviews with the electricity suppliers' project managers.

The findings largely confirmed the hypotheses formulated ahead of the research. Even in buildings, in which the concept has been implemented, "Mieterstrom" often is unknown. This is not only due to a deficient information by the suppliers, but also to a lack of interest towards electricity supply in general and new, perceived as being complicated concepts in particular. High participation quotes could only be reached in projects, in which the respondents valued the use of renewable energies and local production higher than the price, or when the "Mieterstrom" product was offered too much lower prices. However, certain sales methods also can lead to high participation quotes.

Despite different framework conditions in the examined projects, the results of the study allow the author to provide recommendations for action to reach higher participation rates in "Mieterstrom" projects.