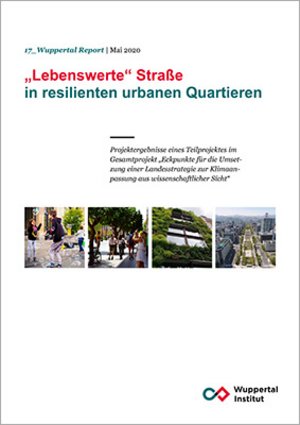 Urban areas are confronted with various ecological, social and economic challenges, which require new or modified approaches to action and planning. Climate change with its spatially effective consequences is one of the central ecological challenges of the 21st century. Cities are both causers and victims of climate change. They are places of residence, home, work and production. However, due to their high population density and the agglomeration of economic capital, cities are also highly vulnerable to extreme events such as heavy rainfall and heat waves. Green infrastructures can therefore not only be a strategy for adapting to the consequences of climate change, but also offer the potential for new habitats in order to reduce or stop the extinction of species. The present concept study is dedicated to the question of how roads can be further developed and designed in line with the triangle of objectives mentioned above, i.e. how a transformation of urban neighbourhood roads into "liveable" urban and street spaces can be achieved.