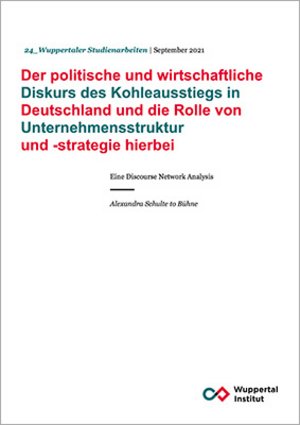 In light of progressing climate change, phasing out the use of fossil fuels is inevitable. This is reflected not least in the political decision to phase out coal-fired power generation in Germany, which has not only ecological impacts but also social and economic effects at societal level in the context of structural change. This change is accompanied by a political and economic debate, which has not yet been systematically analysed in the literature. Consequently, the first objective of this master thesis is to analyse the political and economic discourse of relevant actors on the German coal phase-out. The analysis focuses on two selected lignite mining areas: the Rhenish and Lusatian districts. The second objective of the master thesis is to analyse two actors in the region that are likely to experience significant economic consequences from the coal phase-out: The energy suppliers RWE (Rhenish district) and LEAG (Lusatian district). For this purpose, the potential effects of the corporate structure and strategy of the energy suppliers on the discourse and consequently on the structural change were investigated.

An overview of the development and reasons for the coal phase-out in Germany and its impact on structural change was first provided via a literature review. In addition, company profiles of RWE and LEAG were prepared, focusing on corporate structure as well as strategy. This was followed by an analysis of the political and economic discourse using Discourse Network Analysis, which is a mixed-method approach combining qualitative content analysis with quantitative network analysis. Using this method, it was possible to analyse which topics are part of the respective regional discourses and, further, which content-related positions the energy suppliers take in the discourse. In addition, it was possible to evaluate with which actors the energy suppliers have similar as well as competing attitudes towards discourse content. Subsequently, the results were contextualised and evaluated based on the findings from the literature review on regional socio-economic conditions of the districts as well as the respective corporate structure and strategy.

A central result of this work is that the discourse in the Rhenish district is fundamentally more optimistic about the coal phase-out and structural change than in the Lusatian district. Another key finding is that RWE is very active in the Rhenish discourse, is at the center of the discourse coalitions and takes a positive stance toward the issues relevant to the coal phase-out. What is striking here is the particularly high discursive overlap between RWE and the Green Party of NRW. LEAG, on the other hand, is in a coalition in favor of lignite in the Lusatian discourse and generally takes a less proactive stance on issues that could promote regional structural change; LEAG is generally more negative toward the coal phase-out. The causal relationship between corporate structure and strategy and the effects on the respective regional discourse could not be fully clarified using the present method. However, by means of the Discourse Network Analysis, the role of RWE and LEAG in the context of the respective discourses on the coal phase-out in Germany could be systematically analysed for the first time and ultimately contribute to a better understanding of the political debate around the coal phase-out at the regional level.